Skip to Content
By continuing to use this site, you agree to the use of cookies.Find out more
Home News Guest Post (Article) Why This ‘Pandemic’ is Looking More Like a Social Engineering Experiment

Yesterday my wife, a native of Korea, made the arduous trip to her homeland from Toronto in order to help her mother, who had been diagnosed with Stage IV cancer, with the protocols of High-Dose Vitamin C and a natural eating regimen. This hopefully will be an inspiring story in itself as things continue to progress along.

However, the reason I bring it up is because of the difficulties my wife experienced in getting to Korea as a result of COVID-19 regulations, and how this has gotten me thinking even more deeply about the nature of this pandemic.

In order to go to Korea to assist her mother, my wife had to go to the Korean Embassy in Toronto, provide proof that she was not suffering from the Coronavirus, (with the documentation having a 48-hour expiry date), proof that her mother had been diagnosed with cancer, proof that she had enough money to sustain herself while in Korea, and proof that she would have a place to stay in Korea. Eventually satisfying all these conditions, she was given a visitor’s visa and set out to fly to Korea through Vancouver. Before boarding the flight to Korea, she was given a document in which she was asked to agree to finance her own quarantine in a special hotel for 14 days (about $1600) if deemed necessary and agree to abide unconditionally to all government measures including departure from Korea orders if the authorities deemed it appropriate.

Arriving in Korea, she told me she literally had to go through hoops from one counter to the next and get documents sent from her mother’s house certifying her family identity, then agree to pay a taxi over $100 in order to be ushered directly to her mother’s house, where she had to sign off on a strict 14-day quarantine in the house that would be monitored by the government and law enforcement on a daily basis.

What strikes me as odd, from this one experience that is absolutely factual and affects my family personally, is the amount of care, attention, precision, and gravity that was given in the case of a person (my wife) who had no signs of illness and furthermore had a doctor-certified test document saying that she did not have COVID-19. Measures like this worldwide would purport to solely be motivated by the prevention the death of world citizens, would they not? I would argue that, even based on mainstream-accepted ‘dangers’ about COVID-19 (themselves dubious at best), all these measures were useless, a complete waste of time, money, and valuable human resources.

This all got me thinking. If that attention and the human and financial resources that have been spent on this ‘pandemic’ had been given to end world hunger, do any of you doubt that world hunger would have been eradicated by now?

The ‘official’ numbers of COVID-19 deaths worldwide, according to the website Worldometers.info, as of May 4th, is 251,421. I will not contest this figure for the moment, but later on will give evidence that this number is inflated. But let’s use this number for now.

Let’s compare it to the number of deaths worldwide from starvation since January 1st, according to the website theworldcounts.com: 3,073,421. Even as I type in this number it has already changed, as it does continuously every two seconds or so. My question is, if our world leaders are so concerned about human mortality, should they not be devoting at least 10 times the amount of financial and human resources that they are giving to this pandemic to ending world hunger? Should they not have come together and done this decades ago?

This is just one example. There are countless, which show us time and again that the true agenda of our political leaders is almost completely antithetical to the actual health and safety of the people of the world. And it should have all of us suspecting that the coordinated worldwide efforts to mitigate the effects of COVID-19 on the global population is not really about public health and safety but rather part of a different agenda.

Now as to that staunch figure of worldwide deaths from COVID-19, which tells us that over a quarter of a million people have died from the virus–not an insignificant number, when it gets stand-alone framing in big bold print on mainstream media 24/7. That, in combination with the ongoing ticker of new cases cropping up, is used strategically to maximize fear, thereby maximizing public compliance.

Evidence is coming out every day that these numbers and the way they are presented are not truthful and are conflating the level of danger (and thus the need for a lockdown).

For example, many of the deaths that are in the official number of COVID-19 deaths are actually co-morbidities, meaning that the person who died had other pre-existing health conditions that contributed to their death. There is no evidence of the extent of the impact, if any, of COVID-19 in the case of these co-morbidities. In fact, in some cases, even where an alternative cause is determined, it is still registered as a COVID-19 death.

Dig Deeper: “If You Die of a Clear Alternative Cause, It’s Still Listed As A COVID Death” – Dr. Ngozi Ezike

This chart below of weekly pneumonia deaths reported shows a precipitous decline in the number of pneumonia deaths in the US which coincides with, you guessed it, the beginning of the reporting of COVID-19 deaths. 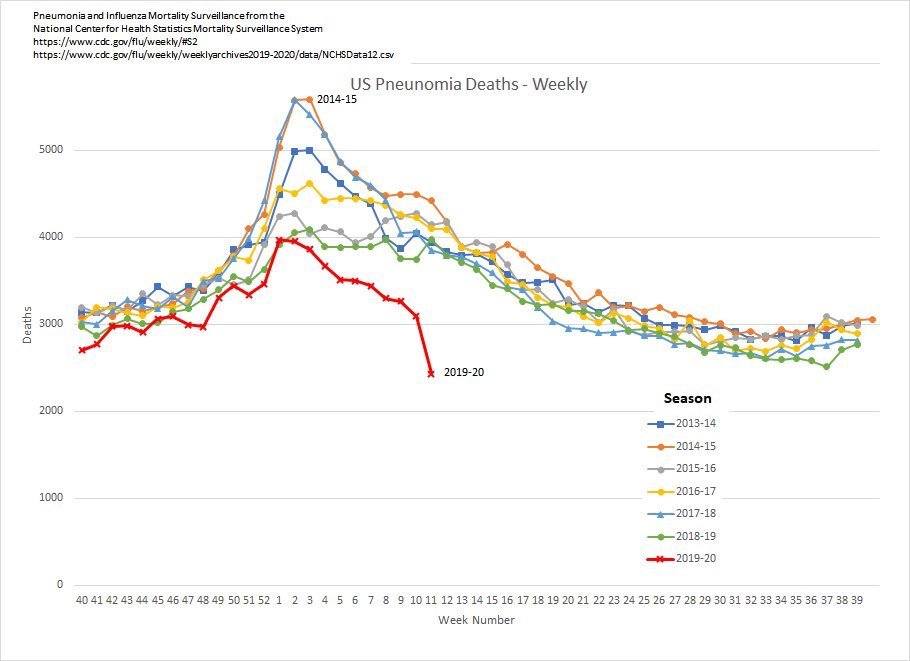 In other words, deaths that would have been determined to be caused by pneumonia in previous years are being called COVID-19 deaths, in some cases without that person even being tested for COVID-19! In effect, more and more evidence is pointing to the idea that there is nothing really happening in the world any different from any other year in terms of deaths from infectious flu-like diseases. Yet my wife has to go through all sorts of machinations in order to be permitted to visit her mother?

So much more can be said about particular ways that figures and projections are manipulated to create a perception of fear and danger for this pandemic, but for now let’s look at the larger mechanism at play here.

The Script Followed by Our Leaders

In the interests of having an informed and capable public, are our leaders keeping us updated on these inconsistencies, and helping us get an accurate picture of the true extent of the dangers involved with this particular disease? For the most part, no. Politicians of all stripes come onto the airwaves to make the same announcements everywhere: “Because you have been good boys and girls, we, your authority, has been able to start getting this crisis under control,” combined with “you are warned that you must continue to obey us to prevent a rebound in the number of infections.” Then they might criticize examples of “bad” citizens not complying.

Again, I simply need to reflect on my personal experience here in Ontario, Canada, to reinforce my theory. Most readers could do the same within their locality. With just a cursory glance at the official briefings here, I heard Ontario Premier Doug Ford try to convince viewers how deeply concerned he was about the safety and health of Ontarions. He was quick to rebuke those who protested in front of parliament in Toronto calling for an end to the lockdown as ‘a bunch of Yahoos.’

And on the subject of something that affects me personally with a 6-year old at home, namely the opening of schools, he has done his best to bring gravitas to his proclamation that schools will continue to stay closed for the forseeable future, citing that ‘my No. 1 concern is protecting our kids out there.’ From stories I’ve heard about Doug Ford, he may be one of the last people I would trust to protect my child. And the notion that keeping kids cooped up at home and not in contact with their friends is keeping them safe ignores the known statistics about COVID-19, where children are in the lowest risk-class for infection and morbidity.

Many theories floating around out there as to the true origins and purpose of COVID-19, based on evidence that it was man-made and the possibility that it was released intentionally, are certainly worth investigating. However, none of those have to be proven for us to be able to see that the pandemic is being used as a social engineering experiment. Now this is nothing new, as basically everything our leaders do is grounded in their attempts to see how much more power they can amass and how much more of our freedoms can be taken away. “Never let a good crisis go to waste,” as Churchill said.

In the case of COVID-19, we are dealing with a worldwide event, and perhaps the biggest social engineering experiment ever attempted. Those who have the ultimate power in the world, those who control our political leaders, are trying to determine how much the public will comply under the circumstances of a pandemic. You can see everything being said by our leaders is based on affirming that they are in control, that we must follow. When attempts to control things in Ontario went too far and the people pushed back, as when an Aurora mom was fined $880 for standing too long in a park with her baby, Doug Ford said bylaw officers “could have used a little bit different judgment.”

Without ceding his own power, he yielded some ground in order to reinforce his own legitimacy, using a famous Machiavellian political strategy. This type of push and pull has been happening all around the world as this pandemic continues to be employed to erode our freedoms. It is part of a bigger war that is being fought between forces with a dark agenda of control and those who are working to bring out the truth. The sooner we all start to see what is going with this pandemic in this larger context, the sooner the truth will shine for everyone to see, and empower us to restore our freedom.