Skip to Content
By continuing to use this site, you agree to the use of cookies.Find out more
Home News Health & Wellness Human Body (Functionality) New Year, Same Ole You?!?

Let’s be honest…We’ve all done it. At some point in our lives, we’ve all gotten super amped up about the New Year by writing down our goals and either keeping them to ourselves or maybe sharing them with a trusted friend or loved one toward helping us bring them to fruition.

With the start of a new season, now is the timeframe when many are eager to acknowledge and replace bad habits in hopes of exchanging for new routines and regimes. But with all that accountability, our well-intended goals allude us as we return to our day-to-day reality, especially after the holidays.

Yesterday in the States marked the start of a New Year as per the Gregorian calendar. It means we are now free to make goals we know we ultimately aren’t going to keep. One would think – with “everybody doing the same,” wouldn’t everyone get what they wanted? Where did the impression that this season would be the right one in which to pursue something new? I mean think about it – even nature is taking a nap yet society has convinced it’s the time to go against that flow [of nature itself]. Why does the retail world condone this okey-doke at the same time year, after year, after year? It’s their way of saying; “Hey, we know you’ve brought [Christmas] gifts for everyone else, so here’s a 50% discount to xxx so you can buy/or something for yourself.”

Each year, we allow our hopes to get high thinking that this New Year will be different. Yet, every year, those resolutions are soon forgotten within a matter of weeks. Why is this the case? I guess a better question is why do we, as a society, continue to “wash, rinse, and repeat” these tactics? Why haven’t we come to a good understanding of what we’re doing year after year?

The reason resolutions don’t come to fruition links to divine timing. Mother Nature has her own built-in biological clock. So when a [hu]man’s “schedule” misaligns with hers, there’s bound to be failures. Being out of sync is why goals set during this time of the year are rarely completed and even if they are, a lot more effort is required because they require more self-generated energy. In other words, you are forcing yourself to go against the grain.

Spiritual laws and principles were never designed to care about our calendar system. The sun and moon know their roles as do the plants, the trees, and the seasons. Even animals have the instinct to know when, where, and how to prepare for changing seasons, especially as it relates to winter. Winter is a time of REST and REFLECTION. Nature doesn’t question its inner knowing nor is it easily influenced by what society says, thinks, or even does. 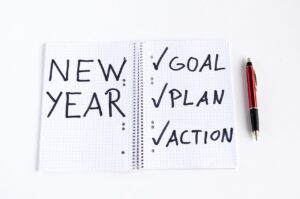 WINTER (5+9+5+2+5+9=35/8) is the last of four annual seasons. Its temperament circles around it being a time of the year when it’s commonly WET (or rainy) plus temperatures are significantly at their COLDest. Numerologically speaking, it carries the energetic frequency of 35/8 (or 5+9+5+2+5+9=35), which is a time in which we shouldn’t work or worry too much for fear of its affecting our health. Yet this season is filled with work and stress from Halloween through the New Year. It’s supposed to be a time of EMOTIONAL BALANCE or INNER REFLECTION.

In its Old English plural form, winter spelled WINTRU carries the energetic frequency of 33/6 (or 5+9+5+2+9+3=33). As a Master Number, the vibration of 33 is centered around going within, “crucifying one’s emotions.” It’s not a routine in which you outwardly honor Christ as an infant born in a manger, but instead as a state of mind, a way of thinking/being (i.e., Christ consciousness or an indwelling of the Christ), which is not a religious experience but instead is a spiritual principle to live by and strive for.

[Actually, the Old French meaning for manger is “crib,” which metaphorically represents our animalistic nature as it relates to materialism. Meanwhile, the word “inn” could physically reference a “lodging, dwelling, or house,” but metaphysically, it refers to a form of consciousness, a higher way of thinking, that we should be striving for, especially during this season. In other words, this is the season in which we strengthen our connection with our own inner Savior, the indwelling of Christ within all of us].

Christ, indwelling: The Son of God or spiritual nucleus within each person. All our thoughts must harmonize with this spiritual center before we can bring into expression the divine consciousness. Each man has within himself the Christ idea, just as Jesus had. Man must look to the indwelling Christ in order to recognize his sonship, his divine orgin, and birth even as did the Saviour. The real self is “closer…than breathjing, and nearer than hands and feet.” It is the kingdom of God in each person. “Neither shall they say, Lo, here! or, There! for lo, the kingomd of God is within you.” (Luke 1&;21). (Metaphysical meaning of Christ)

Honestly, a better approach to the winter season is to write down and meditate our your goals and ambitions but take little to no action just yet. Winter is not the time to start planting a full garden nor is it the time to push your goals into reality. Its a better time to focus on gathering ideas as it relates to what you want to “plant” in the SPRING, what you’ll nurture during the SUMMER, gather in the FALL/AUTUMN, and rest from, in the WINTER.

This is the season to slow down, go within, and spend your time feasting off of previous harvests and sharing with others truly in need. Simply put, get in alignment with the seasons then watch your resolutions align too. It really is all about divine timing. #dphealer