Skip to Content
By continuing to use this site, you agree to the use of cookies.Find out more
Home News Health & Wellness Addictions Confessions of a Mtn Dew® Addict

For nearly a decade, I’ve been an avid Mountain Dew drinker. Unlike many, I’ve never been a coffee drink – EVER!!! Sodas have always been my go-to drink of choice. Even during my pregnancy, I wasn’t satisfied with the doctor’s response regarding how much Mtn Dew® I could consume. Surely, she was lying. Nevertheless, I tried to keep myself on no more than two 16 oz bottles per day or 2 or 3 cans per day. I tried to continue that amount in the years since but sometimes I’d hit that 4th can if I was having a really rough day.

On a weekly average, I probably had around 1,134 milligrams (mg) of caffeine from Mountain Dew alone. (Hint: A single can of Mountain contains 54 mg of caffeine as indicated right on the back of the can itself. So, I’ll let you do the math on how many that was.). In case you’re still wondering how much caffeine I drank early on – when I was in high school, I developed a breast cyst, which was a hard mass that moved around and was quite painful when I tried to sleep on my left side or even face down. According to the National Cancer Institute, that only happens in those who drink in excess of 500 MILLIGRAMS PER DAY! 😲 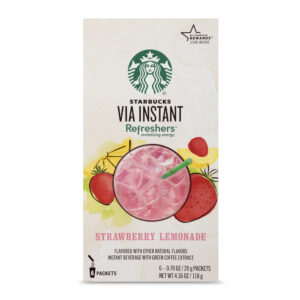 Just like anyone addicted to caffeine, I had tried plenty of times throughout my life to break the habit but couldn’t. I wasn’t a fan of water or coffee so what else what there. I obviously find a way to add water to my diet through Starbucks Instant Refreshers: Strawberry Lemonade, which was a green coffee extract, but even that contained caffeine. (But wait? Does that mean I really was a coffee drinker?)

Plenty of times, I’ve tried to quit to no avail but as you know the withdrawal symptoms – mainly the headaches and nausea were too much to bear. Within a few days, I’d be driven back to my drug of choice. So imagine my shock as I was preparing this piece to find out there’s an actual 12-step program for excessive caffeine drinkers called Caffeine Addicts Anonymous. Nevertheless, the purpose of this post is to share how I was able to break my addiction holistically. In the past year, while enrolled in a holisticA healing approach that looks at the whole person and not just their physical symptoms, in order to eradicate illness and produce well-being in the mind, body, and soul. wellness program, I performed two different experiments in an effort to hopefully decrease if not eliminated my reliance on caffeine. But before I go into that, let me explain how caffeine is what I consider a killer cousin to us all.

Caffeine is a legal, unregulated consumable drug that stimulates the brain and the central nervous system (CNS). It takes about 20 minutes for caffeine to reach your bloodstream and an hour to reach its heightened states of alertness. (Healthline.com)

“Once consumed, caffeine is quickly absorbed from the gut into the bloodstream. From there, it travels to the liver and is broken down into compounds that can affect the function of various organs…It functions by blocking the effects of adenosine, which is a neurotransmitter that relaxes the brain and makes you feel tired…It may also increase blood adrenaline levels and increase brain activity of the neurotransmitters dopamine and norepinephrine…[which] further stimulates the brain and promotes a state of arousal, alertness, and focus.” (Healthline.com)

It goes on to say: “Caffeine helps you stay awake by connecting to the adenosine receptors in the brain without activating them. This blocks the effects of adenosine, leading to reduced tiredness.” In other words, caffeine blocks your ability to deal with phases of lethargic expression through tiredness, weariness, sleepiness, and apathy due to diet, stress, sickness, etc. Unfortunately, adenosine is a chemical found in all of our human cells. (WebMD) Remember, caffeine affects no only the brain but also the central nervous system, which explains how it impacts so many organs.

Does that mean one should quit all caffeine? Well, that’s gonna be hard when caffeine is present in a lot of different food, beverages, and even supplements. Caffeine is found in coffee, cocoa, soft drinks, energy drinks, chocolate, medicines, especially OTC liquid medicines like cough syrups. (Better Health Channel) It’s really about recognizing how much you are ingesting and recognizing if it has a detrimental effect on your health. Here are a few indicators of caffeine overload on the body:

In my first experiment, which lasted for about three weeks, involved taking a supplement called L-Theanine, which I picked up from a local health food store. At that time, I tried L-Theanine by Source Naturals®, which was a part of the Serene Science® brand. On the bottle itself, it provides the following background information:

L-Theanine is an amino acid that preliminary evidence suggested may help ease some psychological and physical aspects of normal everyday stress, including occasional anxiety and tension. Human studies have shown that taking L-Theanine affects the emission of alpha waves in the brain associated with stages of relaxation and focused attention. Preliminary research has shown that L-Theanine crosses the blood brain barrier and suggests that it may support healthy neurotransmitter levels in the brain, and inhibit the stimulatory properties of caffeine.

Per my own research, L-Theanine is derived from Green Tea Leaves (Camellia Sinensis) and it discovered by Japanese researchers in 1949. In 1990, a patented form was manufactured and enzymatically synthesized as a supplement by Takio Kagaku (Japan) under the brand name: Suntheanine®. In a nutshell, its benefits include preventing anxiety from caffeine, promotes relaxation and reduces stress, improves learning ability, improves tastes of foods and supplements, and improves sleep quality. Its 100% water-soluble and does not degrade when heated at 121° for 5 minutes. Unlike caffeine itself, it’s not habit-forming and single doses are from 50-200 mg and kicks in within 30-40 minutes after ingestion. 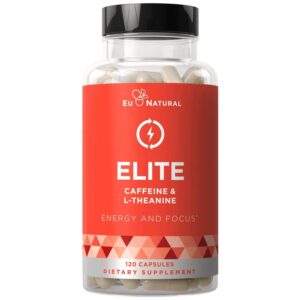 In my first attempt, I took a daily dose of L-Theanine between 8-9 AM for four calendar days with a cup or two of water. On the fifth day, I’d discontinue my dosage for two days. I repeated this process for another two weeks as I recorded my Mtn Dew® intake across all three weeks. In my four days, I only drank one plastic bottle (54 mg) one day and that’s because my stress level was at an all-time high. By the second round, I skip two of four days and by the third round, I skipped only one day. Of course, my Mtn Dew intake increased on the days when I wasn’t taking L-Theanine. Yet and still, I returned to drinking it as usual once the experiment was over mainly because of the withdrawal symptoms including headaches and nausea.

For my next semester, I vowed to try again but this time, I found a brand that contained both 100% Pure Theanine along with 100% Pure Caffeine “at a fully-researched dose.” (EU Naturals) I hypothesized once again that it would have a calming effect and thus decrease my intake. This time it worked! I doubled the experiment length from three to six weeks. I also increase my dosage amount from a single pill in the mornings to 2 pills twice daily – once in the morning and later in the evening. I kept my weekends open to monitor my progress without being under the influence of L-Theanine and of course, I binged on Mountain Dew®. But this time, my allergies kicked in and I became super congested to the point that I couldn’t deny that caffeine was a contributing factor to my health. (Mind you, I suffer from year-round allergies and in the past, year and a half I hadn’t had any allergy reaction until I binged on Mtn Dew® for two separate weekends.

Am I Caffeine Free?

Well, I’m happy to say that I’ve been without caffeine for going into my second week now. I don’t have any desire to drink caffeine (or even drink anything with a lot of sugar at all). L-Theanine really does affect your taste buds as I’m striving now to eat differently as well. Now, I’m not as hungry and when I do it. I’m opting more for organic fruits and vegetables (when available) and eating pasture-raised and/or grass-fed meats, along with greatly reducing eating out especially foods from fast-food restaurants. Who knows? Maybe L-Theanine with Caffeine will work for you too. Why not! It’s worth a try.